In His Amazing Love and Grace, Lourdes A. Jardinico

Chronicling God’s Faithfulness Amidst Great Uncertainty in Bringing the Gospel to Thailand, 1967-1984

Published In Commemoration of PABWE’s 50th Anniversary Celebration 2014
Lourdes A. Jardinico, now Lourdes Holmes, was PABWE’s first single lady missionary to Thailand. She wrote and mailed hundreds of newsletters during her first few decades in Thailand, and continues to do so to this day. This volume compiles all of her newsletters – typewritten on yellow paper – from her arrival in 1967 until her marriage to Charles Holmes in 1984. 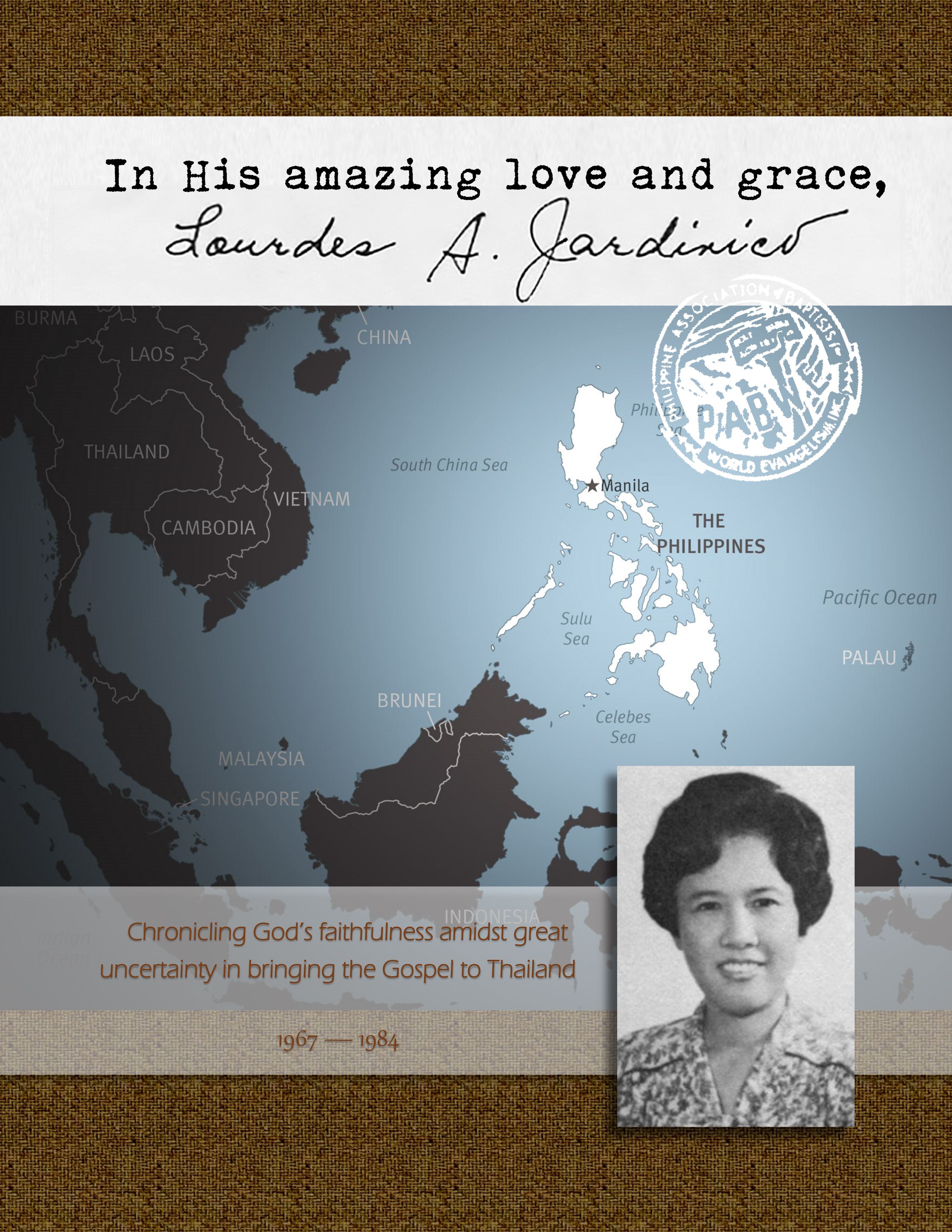 Feeling assured of God’s leading, I applied to PABWE. That was August 1966. But about the first week of August, I received shocking news from home that my father had cancer and his life was uncertain. I had to make a choice – whether to stay home or proceed to the foreign field…That year the Lord took my father home to be with Him in glory.

I went back to my commitment to serve Him in Thailand. On December 6, 1966 the PABWE Board in its quarterly meeting appointed me as the first single lady missionary to the country of Thailand. After six months of visiting churches all of my passage fund and support needs were met and I sailed for Bangkok, Thailand on July 9, 1967. After four days of sailing in the M/V S.S. Laos anchored at Khlongtoey harbor. It was very early in the morning – the time of the day when Buddhist monks go from one house to another for their usual daily rounds of food. The smell of incense was coming from lighted spirit houses. I knew I was in Thailand.

Excerpts from the Back Cover:

Greetings again from the land of more than 40,000 Buddhist temples.

Mom, thank you for the gift from Christian Aid. Guess what? I received no funds from the Philippines both for the Student Center and for my support for one month and a half now. I’m living by faith — looking to Him for daily sustenance and support! And your gift is just timely and needed.

While miles separate us from each other, I have experienced the power of your prayer and the nearness of His blessed presence. It is still true that “Satan trembles when he sees the weakest saint upon his knees.” Your prayer during days of discouragement, your letters of encouragement, your support and thoughtfulness have done much to help me. “I thank my God upon every remembrance of you.” (Philippians 1:3) and with that I will close for now.